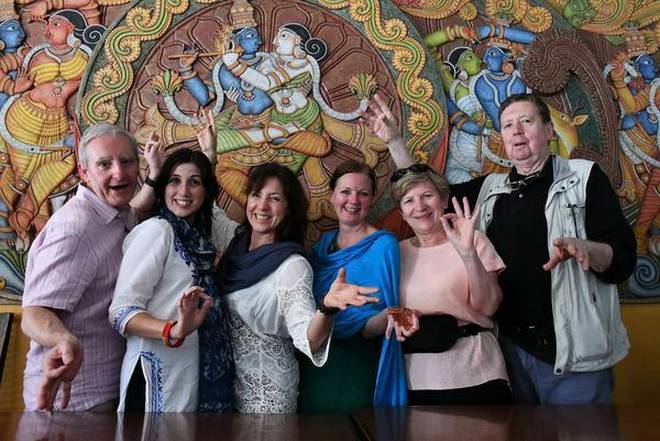 Interview in The Hindu with Soma Basu:

Tucked in the hills and hidden from cities, quaint boutique resorts are becoming new temporary addresses of nouveau writers.

What can bring an investment banker, a teacher, cabin crew member, a novelist and a social activist together to India from different parts of the world? “To find time for their writing and travel to a new beautiful place”. It is their idea of fun to be on a writing retreat.

The passion to write and travel has drawn nine strangers from UK, France, Greece and Australia to spend 10 days together inside a serene plantation resort nestled in the crest of Palani Hills on the eastern fringe of the Western Ghats.

“Thandikudi at an altitude of 1200 metre and bordering the foot of Kodi Hills is the kind of space where stories are created,” says Hazel Manuel, author of four novels and the brain behind the ‘sunsets and spices writers’ retreat’. From the UK, Hazel is not new to India having stayed on a short-term project in Madurai in 2012 and ever since has been visiting the country regularly. It was during her maiden visit that she was introduced to the lush green coffee estate, the ‘Tranquil Nest’ for writing an article.

Dotted with a colourful riot of flowers, beautiful silver oak and silk cotton trees and home to orange, banana, pepper, jackfruit, avocado and pomegranate groves, gentle sun and a pleasant weather round-the-year and a majestic view of the valley, Hazel says the place is exactly what you need to start that novel, finish your chapbook of poetry, or revise the short story you’ve been meaning to send out.

With writers retreats blossoming the world over, Hazel always had this spot in mind. When she met Anjana Chowdhury born in Kolkata and who lived in the UK, France and Holland working as a teacher and charity worker, both teamed up for an unforgettable experience in India and threw open the idea to others. A dozen responded and soon enough they all landed in the awesome inspirational surroundings of Tranquil Nest.

“I can’t be that focussed at home,” says Anne Depaulis from France whose banking job took her to Hong Kong, London, Geneva, China, Japan and other Asian countries. She loves to write memoirs and has written one on her stay in Beijing in the mid eighties. “I have more ideas stuffed up based on my experiences,” she says, “and the writing retreats allow me to live the fantasy of my own room with no disturbance at all. “I am not lonely but the solitude inspires me and the words flow with much ease,” she says.

Lisette Drew, who works with the Melbourne Theatre Group in Australia, loves writing short stories for eight to 12 year old children. She is totally taken in by the rustic rural beauty of the surroundings at Tranquil Nest. “It is unique with its own character and amazing views. We all are on independent creative adventures but get together to give each other tips and feedback.” The place has inspired her to start writing her second story book.

Marilyn Smith who lives in Paris is a cabin crew with the British Airways. She loves to write fiction based on psychology and mental health. Overwhelmed by the narratives in the Indian culture following a village visit, cookery classes and the experience of putting mehndi on her palms at the resort and seeing the Meenakshi Temple, she says the stay has nourished her in every possible way.

First time writer Ian Hobbs is an adult social worker in the UK who felt his writings were not enough for publication. This trip has helped him to firm up the thoughts and given him the confidence to proceed. “Everyone has been generous and encouraging and I feel my writing is making more sense now. Words have more power now,” he says.

David Pilsworth who lives in Switzerland took to science fiction writing post retirement from bank. “There has been an intimate connection with the vibrant countryside at this awe-inspiring resort with their good food and hiking trails,” he says, adding, “after interacting with others I now have some handy strategies for building tension in the plot and using language more powerfully.”

Andrew Watson has come from Greece lured by the retreat’s informality and approachability, the calibre of the other authors and writers in the group and resort’s spectacular beauty replete with birds.

It could not have got better than this for the small group of writers who return home over the weekend. And Hazel can’t wait to get either the same group back or a fresh set of writers next year. She does eight writers retreats a year in France and UK and now plans to do one annually at Tranquil Nest.

For Sunethra Ravi who owns and runs Tranquil Nest, a new opportunity to open out to those who dream of getting away to write could not have come at a better time. Tranquil Nest was her father’s — Rammohan Raja, a pioneer in field of packaging industry – dream project. He had planned and executed this cute getaway hidden away from the world where guests could relax or do activities of their choice. “This year marks his fifth death anniversary and I am delighted to receive this new group of writers who found space outside their own where they felt inspired and could focus on their writing,” she says in emotion-tinged voice.

“A writing retreat is like a ticket to make your writing mean more because of the environment in which it was created!” wows Hazel. She says external factors often shape the themes and many a times the space around the writers matters most.

“It is a great way to combine a small vacation with inspiration, networking, guidance and develop the craft of writing,” says Hazel. “The naturally beautiful surrounding offers the solace to finish that writing project.”